You are here: Home / Mercedes Formula One Car Found After 30yrs in a warehouse

Mercedes Formula One Car Found After 30yrs in a warehouse

A formula one car found in a warehouse was forgotten about for over 30 years is due to go to auction in July and expected to be worth around 5 million pounds!

A car found rusting and abandoned in a warehouse has turned out to be an iconic 1950s Formula One car worth over ?5 million.

The 1954 Mercedes-Benz W196 was driven to victory by the legendary Juan Manuel Fangio in the 1954 Formula One World Championship, and has been described by auction house Bonhams as “the most important grand prix racing car” of all time.

Yet incredibly, the car – which is expected to fetch over ?5m when it goes under the hammer at the Goodwood Festival of Speed in July – lay in a warehouse and “largely forgotten about” for 30 years before being discovered, according to Bonhams boss Robert Brooks.

The W196 brought in many new features which helped propel Argentina superstar Fangio to the second of his five F1 titles – including fuel injection, independent suspension, a super-lightweight bodyshell and revolutionary inboard-mounted brakes.

“The first time I saw this car I needed oxygen. It’s landmark technology and it was driven by a landmark driver,” said racing historian Doug Nye, who said that the car’s relatively poor condition was actually a plus point.

“Some people think it looks grotty – that’s not the point – the really rare cars today are the unrestored ones,” he added. 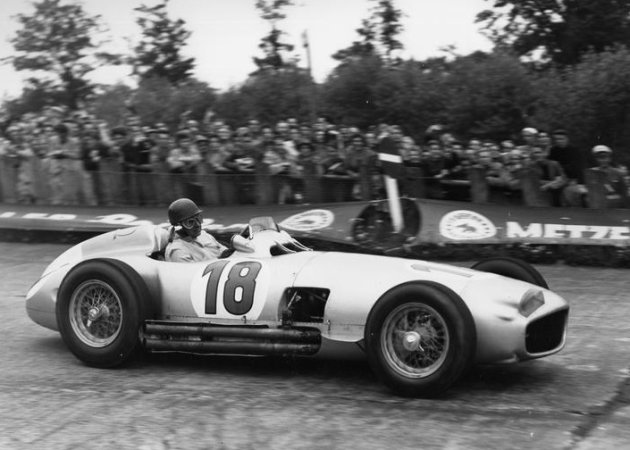 Fangio ordered the car from Mercedes ahead of the 1954 German Grand Prix at the 14-mile Nurburgring circuit, half-way through the season. He won the race in what was his first outing behind the wheel, then won the next two races and came third in the season finale to complete his best-ever season.

The location of the discovery is being kept secret, but the hope is that whoever buys the car will not keep it under wraps for another 30 years: the car apparently ran well before it was mothballed, and the auctioneers hope to sell to an enthusiast who will get the car up and running in time to celebrate the 60th anniversary of its heyday next year….More at Car left abandoned in warehouse worth ?5m – Yahoo! Eurosport UK (blog)

Posted in Mercedes
← Previous Next →